… Patsyuk opened his mouth, looked at vareniki, and opened his mouth wider still.  At that moment a varenik popped out of the bowl, splashed into the sour cream, turned over on the other side, leaped upward, and flew straight into his mouth.  Patsyuk ate it up and opened his mouth again, and another varenik went through the same performance.  The only trouble he took was to munch it up and swallow it…

Nikolai Gogol “The Eve Before Christmas”

Vareniki – are a famous part of the Ukrainian national cuisine, along with Borsht,  cured pork fat with garlic, pampushki(yeast rolls baked and soaked in herbed and garlicky broth),  galushki  etc.., In fact Vareniki  are such a signature Ukrainian food thatsome cities in Ukraine, and even in Canada (that has a large Ukraininan community) built monuments to the Varenik. 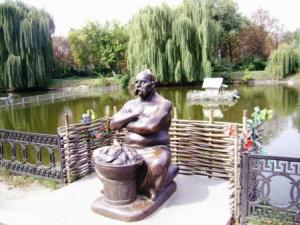 This one is in Mirgorod, Ukraine  – Patsyuk with a bowl of vareniki, a part of sculpture compositions  dedicated to Gogol’s “The Eve Before Christmas”

This one is in Cherkassy, Ukraine 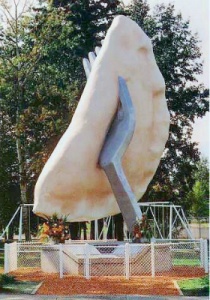 And this is the Canadian Varenik in Glendon, Alberta

Ukraine has been a part of a few  empires in the course of its history, and Ukrainians hungrily soaked up the cooking traditions of their invaders.  Ukrainian cuisine has been influenced by Poles, Turks, Tatars, Austrians, Russians, Germans  and it developed an amazing  culinary tradition of its own.   According to William Pokhlebkin( a scientist, historian,  soviet dissident,  and an author of over 50 books including multiple book  on the cuisine on former Soviet republics)  Ukrainians have to thank the Turks for the introduction of Vareniki to their cuisine. Turks brought their version of a filled dumpling a “Dush Vare”  that was filled with lamb and  spices. Lamb, however is not a traditional part of Ukrainian diet, and most of the spices were hard to come by, therefore soon enough the fillings evolved to a more accustomed to a Ukrainian palate taste of potato and fried onion, berries (sour cherries usually), buckwheat and mushrooms, cooked wheat,   pickled and/or sautéed cabbage, fish, poultry, and variations of more common meat fillings usually include pork, veal, and beef.   The preparation for the dough has many variations as well; some use sour milk(kefir, buttermilk, sour cream) or whey;   some add boiling water, some add ice cold water , and then there’s the  debate of whether to add eggs to the dough.

For a long time vareniki were not a part of the usual fare for the common Ukrainian, but rather a festive treat.   They were a staple in the major religious and personal holiday feasts, a customary breakfast for the new bride after the first wedding night and for a new mother, representing a “filled” life of a woman. 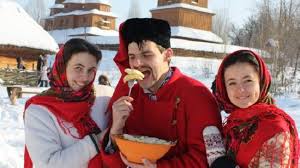 For me, Vareniki are forever associated with summer.  My mom and grandma made vareniki with fresh sour cherries, plums, apples, quince, gooseberries and red currants every summer.  Nowadays,  in the peak of berry season – my mother in law and I are making vats full of berry vareniki doused in berry sauce and sour cream for our loved ones.   The countertop is covered with flour, the pot is boiling on the stove ready for the first batch to go in. We make haste cutting out circles of dough and filling them with berries, while everyone else in the household walk around us in circles filled with anticipation, nagging “Are they ready yet?”   We cut, fill, pleat, cook, and butter the plump beauties batch by batch, until all the dough is gone.  And then the table is set, kids gather round the dining table fighting over who gets to try the first varenik,  a big bowl of vareniki doused in berry sauce is placed in the middle of the table, a bowl of sour cream is on the table right next to it,  Mmm,  one can rightfully expect that any minute the vareniki will magically plop into sour cream and fly toward the hungry mouths , kids  start to eat , and for a little while the house turns silent, ahh – these are magical vareniki.

The dough for these beauties is made with whey and water. I personally prefer and recommend making the dough with either kefir, buttermilk or whey:- the dough will roll better, won’t get stale and cook to a light and fluffy consistency.   Because the dough is sour, once cooked the acid in the fruit won’t make them hard. 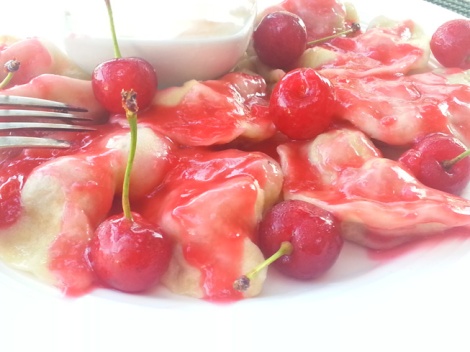 2 responses to “Best Ever, Light as Down Cherry Vareniki.”